1st, 2nd and 3rd place trophies in each of the three races of each World Championship for each class

Gold, Silver and Bronze UIM medals will be awarded to 1st, 2nd and 3rd place, overall in each World Championship 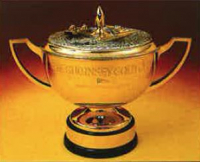 Should there be a tie at the end of the last race, then the Guernsey Gold Cup will be awarded to the boat which completes the longest race at the higher average speed.